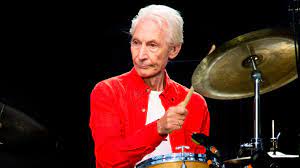 Possibly the most enigmatic of the Rolling Stones, drummer Charlie Watts was solid engine that made that rock machine run for all those decades. He passed away this week at 80 years of age.

Watts was the tasteful engine that made the Stones rock machine purr right along all those years - and that is saying something because so much of the Stones catalog is downright vulgar. Watts just smiled passively through it all, coming across like an adult with lifelong duty to watch after his rowdy bandmates - the adult on the private jet that has been the Rolling Stones.

Watts was determinedly not flashy as a musician, quite unlike his contemporaries Keith Moon and John Bohham.

In that, he was like his British Invasion counterpart Ringo Starr, another drummer whose musicianship was in service to the song, not the performer.

For my money, Watts' opening licks and infectious groove on "Get Off My Cloud" was one of the finest things to happen in all of rock history. It was disciplined perfection, quite like Watts himself.

Sometimes I think about those few giants of modern music history, who somehow were inspired to create musical forms that had never really existed before. Buddy Holly did that, as did Little Richard, as did Phil and Don Everly.

The Everly Brothers were born into a musical family and they were singing on the radio when they were children. And over time they developed a two-part harmony that still inspires chills in listeners to this day. It inspired The Beatles and Simon and Garfunkle, and it gave us some of the most wonderful songs of the 20th Century.

The brothers were around for so long as stars that it seems a shame that they'll be remembered in part for the way their relationship disintegrated in their later years. They disintegrated live on stage, with younger brother Phil smashing his guitar and ending their collaboration forever.

What a shame, because those two brought so many of the rest of us closer with their incredibly sensitive sound. - RAR

“I wrote ‘Revel’ around the holidays in 2020 after my mom recovered from COVID, and while our beloved cousins were suffering through it,” says Jesse Lynn Madera. The Nashville singer-songwriter has garnered attention for her vocal stylings coupled with the nature of her lyrics, which have been compared to those of the late Leonard Cohen.

"At that time, one of our cousins was in the hospital, intubated for the second or third time. The world felt so dark and uncertain, and when I sat down at the piano I wondered how I could be of service. It’s no coincidence that some of the happiest songs in existence have come out of dire times. I think of ‘Revel’ as a meditation and a prayer."

Her debut LP, Fortunes, has been noted for its "otherworldly, mystical feel".  Learn more about her at her website.

Cop-turned-Country-crooner Frank Ray has been a popular newcomer on Texas radio for the past few years, since he turned in his badge for guitar.

Ray just released this catchy tune, "Country'd Look Good On You",  his debut single with BBR Music Group/Stoney Creek Records. His new label reports that this clean Country ditty is presently the Most Added song on Country radio by a new artist (by impact day) in 2021, and third Most Added of the week behind Kane Brown and Keith Urban. So, he is now keeping company with established Country stars.

Here at the CCJ, you won't find many Country music fans, but you will find music lovers who appreciate high quality work, and that is on display in this track. It was produced by Frank Rogers, who is most well-known for his collaborations with Brad Paisley.

Straight Out of Chicago

By way of the Animal Farm

Here at the CCJ we are way into this initial release from the Chicago startup Trickshooter Social Club. Great band name that seems to suggest the energy in this video,  which features a dynamite vocal, infectious, modern, and sassy.

Trickshooter Social Club have a third studio release out on the UK label Animal Farm Music. Check out their website for additional information.

Let's keep an ear out for these folks, way cool!

A Musical Ride with Phillip Rauls

Phillip Rauls has been posting interesting pieces online since 2005, all through his PhotoLog. The former Atlantic Records (and other) promotions man has many tales to tell of his long career in the music business. He put some of it in his great book The Rock Trenches: Journal of a Music Industry Executive, and has generously shared his treasure trove of photos personally taken of the rock royalty of the golden age of that genre. Here, Phillip takes us for a ride through the Redwoods.

Actor-songwriter-singer-musician Corey Landis signed a deal with music firm Big Noise some time back, this according to his website. Corey indicated the company, which has managed the careers of Christina Aguilera, The Beach Boys, Red Hot Chili Peppers, Chicago, Katharine McPhee, and Dionne Warwick, among others, would provide "career direction and strategy, publicity, and music industry outreach".

Corey did an interview with the CCJ years ago - it has been a long time since we talked to him, though we've been fans. He came to our attention as a sensitive piano man who has written some incredibly beautiful songs.

In his new incarnation as the singer for the duo Black Angel, Corey is expressing a whole new side of himself; a dark counterweight to his public personae as the "5-Hour Energy" drink guy and the star of low-fi science fiction films like "Dinocroc versus Supergator", and more recently in "Mr. America" and "High Holiday". He got his start in Hollywood with a role on "That 70s Show" and has a long list of independent film credits.

Corey is a legit talent who deserves a great starring vehicle. Black Angel probably isn't that but perhaps his management firm has greater insight.

Who doesn't like Jeff Garlin? Or maybe, who knew Jeff Garlin was into guitars and other music nerd stuff?

Garlin is an American stand-up comedian and actor, well known for his role as family patriarch Murray Goldberg in the ABC series The Goldbergs and Jeff Greene in the HBO series Curb Your Enthusiasm. He has also had recurring roles in other TV shows, including Mad About You and Arrested Development.

Garlin and guests share stories about musicians important to them. In this episode, Jeff reveals his favorite guitar and explains his hesitation for playing in front of an audience.

Like a modern take on some classic Blues? Nashville-based Americana singer-songwriter David Starr has been doing cover versions of tunes that he credits with influencing his musical direction. So far, he has released covers of  “Magnolia” (J.J. Cale), “Drive” (The Cars), “Angel From Montgomery” (John Prine), “I’ve Got To Use My Imagination” (Gladys Knight), “Someone Like You” (Van Morrison), “These Days” (Jackson Browne), “Gotta Serve Somebody” (Bob Dylan), and “Every Kinda People” (Robert Palmer/Andy Fraser). With this video he takes on “Statesboro Blues” with the assistance of Mark Prentice on bass and organ, Matt Bubel on drums, Dan Dugmore on lap steel, and John Prentice on electric guitars.

This lyric video was directed by Jason Lee Denton.

Foxx Bodies often describe themselves as an accident. Bailey Moses, Adam Bucholz, and Matt Vanek came together in their shared home when their singer Bella Vanek asked everyone to play loud music she could scream over after she began unpacking her newly-recognized childhood abuse. While each of them had been practicing musicians from a young age, none had been in a band before Foxx Bodies.

On Vixen, their upcoming LP, Vanek makes her trauma sound dangerously intriguing, singing about her life in such a startling and honest way that it makes you examine your own ideas of mental illness, gender, and trauma. Marry that with Moses' salty, surfy licks, Bucholz’s elaborate fills, [Matt] Vanek’s infectious baselines, and it's all over. The four desert punks meld together to bring a magnetic, dramatic air to each song, delivering romping punk and the occasional piercing scream. 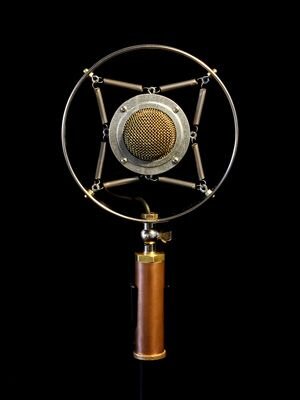 Ear Trumpet Labs, in Portland, Oregon, must be one of the coolest little companies in the world.

The creation of former software developer Philip Graham, Ear Trumpet designs and builds microphones for studio recording and live performance. But they aren't just any microphones.

Graham and his small team hand build high end audio devices that double as works of art. Check out the Ear Trumpet Labs website to see their extraordinary work.

They just built their 10,000th mic and to celebrate their 10 years in business, Ear Trumpet is presenting a concert with proceeds going to Micro Enterprise Services of Oregon. MESO is an organization established "to elevate and empower historically excluded and under-resourced entrepreneurs with tailored business assistance and flexible capital to build family wealth through small business ownership".

That seems like a lot of money for a guitar built in 1951 or 1952. It was known as "Number One", the prototype for the Gibson Les Paul's that would become an industry standard.

Les Paul's first pass at his namesake instrument will be sold on October 13, 2021. It is what Christies advertises as an "Exceptional Sale".

Exceptional indeed. It is one of those portals that opened up entire new realms of music, as important to the history of Rock music as Guttenberg's marvelous press was to mass communications.

Have you been wanting to take up the guitar?

Austin musician Josh Thomas has created a primer that is useful to the beginning guitarist. "If you’re worried about being too old to learn, not having the time or resources, or you just don’t know where to start, you’re in the right place. This article will be your complete beginner’s guide to learning guitar so you can walk into the music store with confidence."

Click here to read Thomas' long article on getting started.

EDITOR'S NOTE: Learning to play musical instruments is the best thing I ever did for myself. If you are thinking about diving in, check out Josh's primer.

The internet is filled with people giving guitar lessons. Some are really good.
Check out this site for an overview of some of the learning resources available to folks interested in the guitar.

For many years, the RARWRITER Publishing Group has been capturing stories and presenting feature articles on an international community of artists in various fields. Use the RARWRITER Archive link below to explore those past editions of www.RARWRITER.com, now called the Creative Culture Journal. Use the links provided there to explore issues published previous to our transition to this new format.